The need for an intercultural art of living

Being able to deal effectively with our differences is a delicate matter in our current times.
The objective of the foundation calls for an intercultural art of living as an answer to the appeal of ‘the multicultural society’.

Dealing with differences has been raised as a social issue by Paul Scheffer, in his controversial article Het multicultural drama (2000). Before that, the international debate had been heated up by Samuel P. Huntington’s terrifying perspective on the Clash of Civilizations (1996). Since then, there has been a heated political debate in many lands with multicultural populations, and the social debate in the social media is getting louder and more troubled ….

The QFWF wants to play a role in tilting the debate

The QFWF wants to help turn the polarized debate about migration, refugees and religious strife from a problem for ‘political experts’, to a relevant issue for all of us, making an ethical appeal to everyone, from the current administration to our neighbours on the street.

How do we deal with, and how do we want to deal with ‘the strange other’?
That strange other can be the foreigner, the outcast, the fringe figure, the refugee and sometimes ourselves …

In order to tilt the debate, the QFWF sees it as a call to recalibrate the awareness of who ‘we’ are as citizens of the cosmopolis: nomads with intercultural identities.
These geopolitical landslides affect all of us as co-inhabitants of our shared planet Earth.
That is why the QFWF addresses this issue as a question, an ethical issue of a practical, social and political nature:

How do we not exclude the other and the others ― the ‘stranger’, of a seemingly different nature ― but to see them as part of us, as ‘the strange other(s)’ in ourselves?How do we create growth inducing inter- and transcultural connections, instead of a divide and rule philosophy, us versus them mentality and an increasingly aggressive environment, as can be heard in the cry: “Who does not belong to ‘us’ (culture, race, religion, ethnicity) is against us …?”

By stimulating the recognition of the beauty of our differences and shared commonality, instead of a fear of ‘otherness’.
The world of the arts and (inter-)cultural expressions create space both in and between people and establish meaningful connections between cultures!

The QFWF aims to collect artistic, philosophical and practical forms of cultural wisdom from East and West, North and South and to further develop them into useful forms that inform and inspire the intercultural art of living … so that people interact as willing players in an in-between space (as defined by Hannah Arendt) and also keep in touch with their core selves, so that we can fully develop and happily share our world with each other in a spirit of cooperation, openness and hospitality.
Hospitality, respect and openness and other shared values of humanity are what truly connect people as sisters and brothers ― open to a common playing field for all!

The QFWF is acknowledged as organization with an culturele ANBI status (NL). 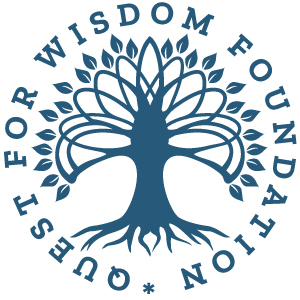